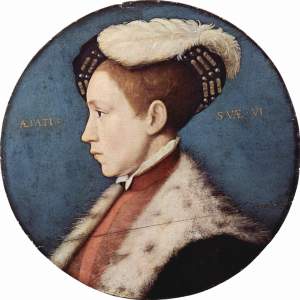 “I am faint; Lord have mercy upon me, and take my spirit.”

The Tudor dynasty of English kings began in 1485. The first Tudor king, Henry VII for many years lived in obscurity and exile in Brittany and France with little prospect of ever becoming a king. But in 1485, with backing from other European rulers and disaffected Yorkist adherents, Henry went to England with a small army and managed to defeat the superior forces of King Richard III at the Battle of Bosworth. After an uneasy reign spent quelling rebellions from time to time, Henry VII died in 1509 leaving his seventeen year old son Henry VIII as his heir. The new king was consumed with begetting a son to continue the dynasty leading to his many marriages and religious and political turmoil.

In 1537, Henry’s third wife Jane Seymour at last gave birth to the coveted male heir. He was named Edward and was destined to become King of England upon the death of his father in 1547. Edward’s childhood was spent acquiring a humanist education in a protected and safe environment. His health was closely scrutinized by doctors who hovered over him, constantly checking his temperature and worrying about what he did and didn’t eat. Edward was certainly brought up on a rich and sumptuous diet. In October of 1541, the French ambassador described Edward as handsome, well-fed and remarkably tall for his age. The Imperial ambassador observed Edward’s posture and revealed his right shoulder was lower than his left. He may have had a slight scoliosis of the spine. The condition was also noted in his maternal uncle, Edward Seymour, so it may have been hereditary.

In that same month, Edward became ill with a quartan fever, a form of malaria. For about ten days, Edward was so ill his life was believed to be lost. King Henry was distraught and dispatched his own physician, Dr. William Butts to attend Edward. Dr. Butts visited regularly and confined Edward to soups and broths when he was actually craving meat. Edward became ill-tempered with the exacting manner of the good doctor and began to call him a knave and fool. The doctor finally allowed him some meat but Edward was becoming fed up and asked the doctor to leave. This was a good sign that he was recovering which he eventually did. He was allowed to return to his carefree lifestyle but he would become periodically ill with these fevers as he grew up.

After he became King, in October of 1550, Edward’s personal diary goes blank. He was bedridden with a mysterious illness. All those around him didn’t expect him to survive. Even the doctors gave up. All this news was kept very secret but by the end of the month, Edward had recovered and returned to his studies. Edward was never a robust physical specimen but he was able to enjoy the hunt and riding on horseback. As he matured, he participated in jousting.

In the spring of 1552, the doctors became very concerned when Edward became sick with not just measles but smallpox. This time the illness was brief and he fully recovered. By April 12, he was writing to his friend Barnaby Fitzpatrick in France. In October 1552, Edward met with the Italian astrologer and physician Hieronymus Cardano who noted that Edward was short-sighted and a little deaf. Edward did wear spectacles and used a glass to read. It was also noted he was treated with a concoction for his eyes.

In December of 1552, things really began to unravel as Edward exhibited the signs of the illness that would eventually prove fatal. It’s possible Edward had been exposed to tuberculosis before his bout with the measles. One of the known consequences of measles is the suppression of the immune system which allows latent infection to be exposed.

On February 15, 1553, Edward became sick with a feverish cold. His elder sister Mary came to visit him in an effort to repair their relationship which was fragile due to religious differences. Edward was bedridden during the meeting with a violent cough. Most of what we know of Edward’s last illness comes from the writings of the Imperial ambassador, Jean Scheyfvre. He was in intimate contact with John Banister, a twenty-one year old medical student whose father was a minor official in the King’s household.

Rumors that Edward had been poisoned were raised immediately. There was a lot of secrecy surrounding him because he was kept in isolation. His illness and its symptoms were very complicated and expert doctors were called in to consult. The Imperial ambassador reported an unknown woman had been allowed to treat the king. An Italian writer, Giulio Raviglio Rosso said the mysterious woman had come forward saying she could cure the king. Despite protests from the doctors she was admitted and administered potions which soon made the king worse, causing his limbs to swell.

By March 17, Edward was still not well, looking thin and weak and had not left his room. The doctors believed if he was moved it would worsen his condition. By early April, he had recovered enough to take the air in Westminster Park on days when the weather was clement. On April 11 Edward took a ride down the Thames to Greenwich where it was believed the air was cleaner. He appeared in public in the gardens the next day. Scheyfvre notes from his sources that the king was getting weaker by the day and mentions the different colors of his sputum from his cough. The doctors said what was coming from his mouth was colored a greenish yellow or black and sometimes pink like the color of blood.

On May 7, the councilor William Petre wrote a hopeful letter that Edward was improving and would take the air soon. The regent, the Duke of Northumberland wrote to William Cecil saying the doctors expected Edward to make a full recovery. Five days later, Scheyfvre wrote that the physicians now believed the king was suffering from a suppurating tumor of the lung which was made worse by a wracking cough and a constant high fever. His belly was swollen and his body was breaking out in ulcers, possibly bedsores. Scheyfvre now fully expected Edward to die.

On May 17, Edward met with the French ambassadors but coughed and appeared weak. At the end of May he was wasting away rapidly and could not rest without opiates. His body was swollen, especially his head and his feet. During these agonizing days, Edward was cared for by two of the chief gentlemen of the bedchamber, Sir Thomas Wroth and Sir Henry Sidney, along with Edward’s favored groom of the chamber Christopher Salmon. He may have played board games with the men but other than that we don’t know how he spent his time. We do know he was concerned about the succession. On May 21, Edward altered his will adding a “Devise” naming his cousin Lady Jane Grey and her heirs as his successor to avoid having his Catholic sister Mary rule England and return the country to Catholicism.

On June 10 the doctors gave the king three days to live. The Imperial ambassador states that starting on June 11 he was unable to hold anything on his stomach so he lived on restoratives. While Scheyfvre reports that Edward had a fever that never breaks, on June 15, he was attacked by a violent, hot fever that lasted twenty-four hours. This happened again two days later. Edward no longer had the strength to rid his own body of certain humors but when he did, they had a terrible stench. His legs were swollen and he was forced to remain flat on his back.

By June 19, even the king had given up. On June 21, Edward ordered his new “Devise” be authenticated under letters patent. On June 24, Scheyfvre told the Holy Roman Emperor Edward could hardly breathe and rarely stirred. His body no longer performed its normal functions and his nails and hair were falling out and he was covered in scabs. Edward’s last days must have been unendurable. He was incapable of doing anything more than waiting and preparing for death.

On July 1, Edward appeared at a window possibly to counter rumors that he was already dead. His appearance did not inspire those who saw him. He was wasted and thin. Crowds gathered on July 2 and 3, hopeful he would emerge again. But one of his gentlemen announced that the air was too chill for him to appear.

Sir Henry Sidney was with the king in his last hours. Before Edward lost the ability to speak, Sidney says he prayed to God to deliver England from popery and this was why he elected the Protestant Lady Jane Grey to succeed him in place of his sister Mary. He wanted his subjects to live and die in the Protestant religion. The reforming bishop of Ely, Thomas Goodrich, heard Edward’s last confession. On July 6 between eight and nine o’clock in the evening, Edward died in the arms of Sidney saying “I am faint; Lord have mercy upon me, and take my spirit”. Sidney said the king surrendered his spirit in great sweetness. Also present were Wroth and Salmon, along with two doctors, Owen and Wendy.

A surgeon opened Edward’s chest after his death and decreed the king had died of a lung disease. The lungs had two great ulcers which were putrefied. Some of the symptoms he exhibited such as the swelling of the legs, the failing pulse, the falling out of hair and nails could have been indicative of a reactivation of tuberculosis. However, he didn’t exhibit the coughing up of blood which was a symptom of the disease.

Edward’s biographer Jennifer Loach believes he suffered from a suppurating pulmonary infection which is corroborated by what the doctors found. She suggests his cold may have deteriorated into acute bilateral bronchopneumonia for which there was no treatment at that time. The infection would damage the bronchi and lungs causing abscesses. This would create the sputum mentioned, with the body coughing it up. The infection would have spread to the pleural cavity and produced fever, weight loss and more sputum. General septicemia would result and this would attack other organs. The evidence of swelling in the lower body indicates renal failure. The truth is we will never know for sure whether it was tuberculosis or not. But we do know it was a long, painful and excruciating death.

Edward’s death was kept secret for as long as possible. His sister Mary early on had somehow gotten word of her brother’s death and fled to East Anglia to assemble troops to gain the throne. On July 10, Lady Jane Grey was declared Queen and taken to the Tower to await her coronation. Nine days later, Mary was victorious in the showdown that resulted and become Queen Mary I of England. She finalized Edward’s obsequies and he was buried on August 8 in Westminster Abbey in a white vault in an unmarked grave in the Lady Chapel, next to his grandfather and grandmother, King Henry VII and Elizabeth of York.

Further reading: “The Tudors: The Complete Story of England’s Most Notorious Dynasty” by G.J. Meyer, “Edward VI: The Lost King of England” by Chris Skidmore, “Edward VI” by Jennifer Loach, entry on King Edward VI in the Oxford Dictionary of National Biography written by Dale Hoak

13 thoughts on “The Illnesses and Death of King Edward VI”