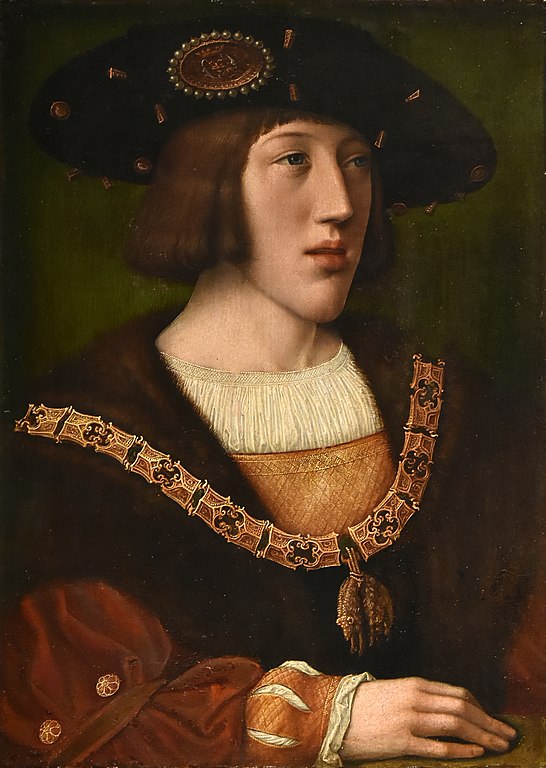 The Freelance History Writer is pleased to welcome Heather R. Darsie to the blog with a guest article. Heather is an attorney and the author of Anna of Cleves: The King’s Beloved Sister and the administrator of the Maidens and Manuscripts blog. You can find her on Facebook and Twitter.

Charles von Habsburg, the eldest son of Philip von Habsburg and Juana de Trastámara, was quite the prize groom in the early 16th century. Charles was born 24 February 1500 at the Prinsenhof in Ghent, Flanders, which is now part of modern Belgium. His parents, better known as Philip the Handsome and Juana the Mad, were their parents’ heirs, setting up Charles to inherit territories that covered most of Western Europe. Through his father Philip, Charles inherited Burgundy and the Low Countries. Through his mother, Charles inherited Spain. As a likely contender for Holy Roman Emperor once his grandfather Maximilian I died, Charles stood to gain the control of Germany, Austria, Bohemia, and parts of Italy, too.

Charles had an almost inexhaustible number of possible brides. During his lifetime, he was engaged to at least six different women, with only one resulting in marriage. He was engaged to two English princesses, three French princesses, and one Portuguese princess. Two of his fiancées were his close cousins.

In 1501, at the tender age of roughly eighteen months, Charles was betrothed to Claude of France. Claude, the daughter of Anne of Brittany and Louis XII of France, was the presumptive heir to the Duchy of Brittany. Charles’ father Philip the Handsome liked the idea of his family gaining control over Brittany, given its close proximity to the Low Countries. Three years later, in 1504, Claude’s potential dowry was increased to include the Duchy of Burgundy (Charles V stood to inherit the Estates of Burgundy), Duchy of Milan, County of Asti, and County of Blois, among other French-held territories. Claude’s mother died in 1514, making her Duchess of Brittany. After the death of Claude’s father Louis XII, who was wed to a different fiancée after Anne of Brittany’s death, Claude married Francis I of France.

The second fiancée of Charles V was Mary Tudor, younger sister of Henry VIII of England. Mary was born 18 March 1496, making her roughly four years older than Charles. Mary was betrothed to Charles for the longest out of any of the other candidates. Her father Henry VII betrothed Mary when she was roughly 11 years old to Charles, then roughly 7 years old, in 1507. The engagement continued on into the reign of Mary’s brother Henry before being broken in 1514. Mary was swiftly wed to Louis XII of France on 9 October 1514. Charles did not have to wait long for another proposed bride.

Charles, 14 years old and freshly unengaged, was betrothed to Louise of France in late 1515. Louise was born in August of that year to the new King of France, Francis I of Valois. The hope was that a marriage between Charles and a French princess would resolve the Habsburg-Valois disputes over the Duchy of Milan. Sadly, little Louise died in September 1517, when she was just two years old. Luckily for Francis, he had another daughter by this time who was available for another Habsburg-Valois betrothal.

Charlotte of France, Francis I’s second child and second daughter, was born in 1516. Not long after the death of her older sister Louise, the toddler Charlotte was engaged in 1518 to Charles, who by now was 18 years old. During his engagement to Charlotte, Charles entered into another betrothal agreement with for a Tudor bride.

In 1522, Charles was betrothed to his first cousin Princess Mary of England. Charles’ mother and Mary’s mother, Juana the Mad and Katharine of Aragon, were sisters. Princess Mary was a mere six years old, and Charles 21 years old. Charles was Mary’s second fiancée after a failed betrothal to the French Dauphin Francis III, Duke of Brittany, in 1520 as part of the Anglo-French treaty from 1518. Mary of England and Charlotte of France were both engaged to Charles until Charlotte’s death from measles on 8 September 1524, clearing up any future diplomatic issues should the marriage between Princess Mary and Charles go through. Unfortunately, this engagement was broken off in 1525, partially with Henry VIII’s agreement.

Finally, Charles was betrothed to Isabella of Portugal in 1525. Isabella was also Charles’ first cousin through his Aunt Maria, another younger sister of Juana the Mad. Isabella was born in 1503, making her a more age-appropriate choice at that point in his life than any of Charles’ previous matches. Seven years earlier, in 1518, Isabella was proposed as a bride for Charles, but he was not interested. Isabella threatened to enter a convent if she did not marry Charles. The initial threat did not work, so she waited.

Isabella and Charles were formally betrothed in 1525, and married on 11 March 1526. Charles had swiftly received the necessary papal dispensation, given how closely related he and Isabella were. Although their match was made for political reasons, Charles and Isabella genuinely loved each other. Despite their strong feelings for each other, Isabella’s husband was sadly absent for the majority of their marriage. During their thirteen-year marriage, Charles was with Isabella for only about five years. The couple conceived three children together, the oldest of whom was Philip II of Spain.

Charles was away when Isabella died in 1539. She was thirty-five years old, and lived as the Holy Roman Empress and Queen of Spain during her marriage. Isabella was very ill in 1538, and became dangerously thin. She recovered, and fell pregnant in early 1539. During the first trimester, she was stricken with a fever. Isabella miscarried, and died days later on 1 May 1539. Charles was devastated. He wore black for the rest of his life and never remarried.