The Queen of Spain, Elisabeth of Valois had been in her new home and enjoying conjugal bliss for about a year. Her entertainments were not usually all that exciting really. She would enjoy picnics in the woods which the Spanish grandees and ladies found to be a novelty. Another entertainment consisted of Elisabeth, the King, prelates and the court riding out in procession to receive some ancient relic and escorting it to its shrine. Elisabeth would also go on outings to the cloisters and churches of Toledo and enjoyed visiting with the nuns, a perfectly acceptable pastime for a Queen of Spain.

Elisabeth was always heartily hailed and greeted by the people when she ventured out. Her coach would be followed by a great crowd shouting “Isabel of Peace and Goodness”. Elisabeth always made sure that her face was open, not covered in scarves or veils so the people could recognize her. The people would congratulate each other and boast about how they had seen the Queen. It was during one of these visits that Elisabeth experienced a frightening accident.

One afternoon, after the sun had gone down, Elisabeth, accompanied by the condesa de Urueña and the duchess of Alba and other ladies, decided to ride in a litter drawn by mules to the convent of Santa Clara in order to stroll through the perfumed spring flowers of the extensive garden belonging to the nunnery. While there, Elisabeth was joined by Dona Juana, the king’s sister. Dona Juana felt the night was oppressively hot and proposed that the party quit the garden and drive out into the open country outside the gates of the city. The Queen agreed.

The duchess of Alba, as first lady, had originally followed the Queen in a coach alone. This vehicle could hold three occupants. There was a richly adorned seat in the middle where the duchess sat and two seats over the wheels with a narrow ledge for the feet to rest on. Elisabeth and Dona Juana sent away their litters, declaring that because it was so hot, they would ride with the duchess in her coach. The Queen commanded the duchess to keep her seat. Elisabeth and Dona Juana took the seats over the wheels despite the objections of the maid who accompanied them. The maid reluctantly handed the Queen’s ample and wide train to the duchess admonishing her to be careful. 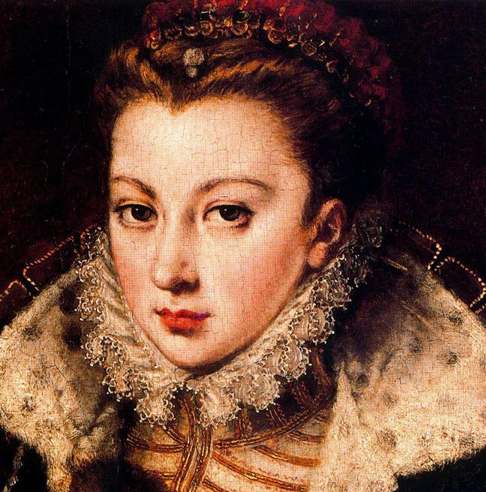 For the better part of an hour, the ladies rode around laughing and enjoying themselves in the fresh evening air. Somehow, during this pleasant excursion, the train escaped from the hands of the duchess, fell under the wheels and slowly became entangled around them. The mules were traveling at a pretty swift pace when the train was suddenly and violently wrenched from the bodice of the queen’s robe. Shockingly, Elisabeth was precipitated forward from her seat and for a few seconds was dragged along the ground.

Dona Juana and the duchess frantically cried out and the carriage was stopped. Fortunately the Queen had fallen short of the wheels and therefore received little injury other than being extremely scared. The women attended to the Queen and she was carried to her litter where the maid had been riding. They returned directly to the palace in great apprehension of the wrath of the king. Elisabeth was carried to her chamber where she was immediately visited by physicians and surgeons. As they were consulting on her treatment, the door opened and Philip entered.

Philip had been told of the accident while in his council of state. He dismissed all the councilors and proceeded to the queen’s apartments in anger and alarm. The surgeons assured the king Elisabeth was not injured and would soon recover from her fright. The king calmed down and the couple dined in private attended by the condesa de Urueña. The king laughed about the accident but he forbade the maid to ever cede her place to another while attending the queen.

The king proceeded to tease Elisabeth about the accident to the point where she was offended and they both parted in a state of mutual displeasure. But in the morning, Elisabeth attended the king and they remained together for some time, finally emerging in public with the king showing tender affection and concern for her health. Elisabeth then had an audience with de l’Aubespine, the French ambassador. He wrote “..the sight of her majesty quite relieved my fears for thank God she looked as gaillarde (alert) and lively as she ever did in her life”.

Further reading: “Elisabeth of Valois, Queen of Spain and the Court of Philip II, Volume 1 and 2” by Martha Walker Freer