Margery Kempe was a self-proclaimed holy woman, visionary, mystic and medieval pilgrim. She is also unique because although she was not proficient at reading and writing, she was determined to record her visions, journeys and spiritual experiences. She dictated her book to a scribe of which only one copy survives, now housed in the British Library. Nearly everything we know about her comes from her book.

She was born Margery Brunham or Burnham in Bishop’s Lynn (now King’s Lynn) in Norfolk c. 1373. She was the daughter of John Brunham, a merchant who served as mayor of Lynn five times and was MP for Lynn six times between 1364 and 1391. Margery had no formal education but most likely learned household management and polite behavior. Her autobiography starts at about the age of twenty when she was married to John Kempe, a burgess of Lynn who owned a house in town.

The Kempes had an affectionate marriage and satisfactory love life. Margery soon became pregnant with the first of her fourteen children. The pregnancy and birth were very hard. After the child was born, she suffered a postpartum depression and mental breakdown that lasted eight months. She acted frighteningly strange and tried to commit suicide. After having a vision of Christ, she recovered dramatically and her position as mistress of the house was restored.

Margery was vain and dressed sumptuously, eventually deciding she needed to start a business to afford her nice clothes. She formed a brewery business which was successful for about four years. When this business dropped off, she started a business as a miller but this failed almost as soon as it was started.

She struggled with some secret sin she felt she had committed when she was young and it bothered her conscience. She felt the failures of the businesses were a punishment. She asked her husband if she could take a vow of chastity. He demurred and they continued to have sex. But she started to seek permission to receive communion every Sunday and other religious favors from the church. She visited an anchorite in Lynn who assured her that her visions were real and told her to report them and gave her his blessing.

She went to Norwich to visit the vicar of St. Stephens. He gave her a good reception. While there, she most likely visited Dame Julian of Norwich, an anchoress and mystic who also had visions. They visited for many days and their conversations were fruitful. She returned home with her church endorsements, hoping they would shield her from complaints from the townspeople who didn’t agree with her visions, her noisy weeping and fits, and her preaching. Although she created controversy everywhere she went, Margery always had supporters among the clergy.

At Easter 1413, she was at worship in her parish church when a stone fell from the ceiling and hit her. Remarkably, she was unhurt. It was after this incident she decided she wanted to go on pilgrimage. She and John traveled the countryside in the summer of 1413, visiting shrines, chapels and cathedrals. During these visits she attracted attention to herself. She would fall down in fits and burst into tears, sometimes offending, sometimes impressing and sometimes boring onlookers.

Margery had decided she wanted to go the Jerusalem. While they were on their English pilgrimage, Margery and John came to an understanding. He asked that they sleep in the same bed; she could go to Jerusalem on pilgrimage if she paid his debts and she must give up fasting on Fridays. After careful consideration and prayer, Margery countered. She would pay his bills before she left if he promised to sleep in a separate bed. She would give up her fasting on Fridays if he took a vow of chastity with her. He agreed.

Seeking even more protection she and John travelled to London to visit the Archbishop of Canterbury at Lambeth Palace where she spoke with him for a long time. He evidently was impressed with her and she received his endorsement. She returned to Lynn and began her preparations for the journey to the Holy Land.

It was customary for pilgrims to travel in groups. The first part of the trip was to sail to Venice and await the galleys to the Jerusalem. Margery’s tears and sermons were annoying to her travelling companions, especially at meals but for the most part, they tolerated her as best they could for the three month stay in Venice. The galleys arrived and took the pilgrims to the Holy Land. When they arrived on the shore, donkeys were hired to carry them and their baggage thirty-nine miles into Jerusalem.

Once in the holy city, they visited many shrines and holy places such as the Mount of Olives, the garden of Gethsemane, the Virgin’s tomb, the Mount where the Sermon was delivered and places where the Virgin had stood or sat. She spent an all-night vigil in the Church of the Holy Sepulchre. Next they visited Bethlehem and then ventured on to Jordan. They visited more holy places and she purchased or was given many relics.

Margery and her traveling companions now made their way back to Venice. Margery had decided to continue her pilgrimage in Rome. She made arrangements to join another party who travelled to Assisi. Margery then joined the party of an agreeable noblewoman, Dame Margaret Florentine and they arrived in Rome in late August or early September 1414.

In Rome she stayed at the hospital of Saint Thomas of Canterbury. While there she alienated her traveling companions and they evicted her. She found new lodgings and a priest and confessor who would minister to her. She spent her days in prayer or visiting shrines and she continued to have many visions.

By Christmas 1414, Margery’s funds were very low. She had no job and may have been reduced to begging for food and money. Eventually, with her extraordinary luck, she encountered her old travelling companion Dame Margaret Florentine. The Dame invited Margery to dine with her every Sunday. She gave her enough food for several days and sometimes some money. When her old companions found out who her illustrious friend was, they apologized for evicting her from the hostel and asked her to return. She said she had no money and they offered to let her stay for free.

A new party from England arrived at the hostel and among them was a young priest who began to admire Margery and became her follower. He gave her enough money to return home. She stayed to experience Easter in Rome in 1415 and left for England shortly thereafter.

She returned to Lynn and life with her husband John. Shortly after her return she fell ill and all feared she would die. But she had made a vow to travel to the shrine of Santiago de Compostela. She survived the illness but she had no money and was in debt. Her friends, wishing her to pray for them at the Shrine, raised enough funds for her trip and she departed in May of 1417. She made it to the shrine and returned to England.

Throughout her life and adventures, she was constantly in trouble for her behavior, being accused of being a heretic. She was imprisoned by the church and on trial many times but always managed to extricate herself from her troubles. After a few more incidences of getting in trouble, she retired to Lynn. During this time, she had some illnesses and her visions continued. She enjoyed going to hear sermons. She lived with John Kempe for some time but then left the marital home and was always chronically short of funds. Her husband fell and hurt his head becoming an invalid. Margery looked after him.

One of her sons came to visit her with his wife. While in England, the son died and then John Kempe died. The daughter-in-law needed to return to her child in Germany and Margery agreed to accompany her on the journey. She was about sixty and lame but she loved travel. They sailed Easter week, c. 1433. She returned her daughter-in-law to her home in Danzig and had many adventures in Northern Europe visiting shrines and holy relics. Her strength was greatly diminished and she began her trip home. She made her way to London via Calais and then returned to Lynn. 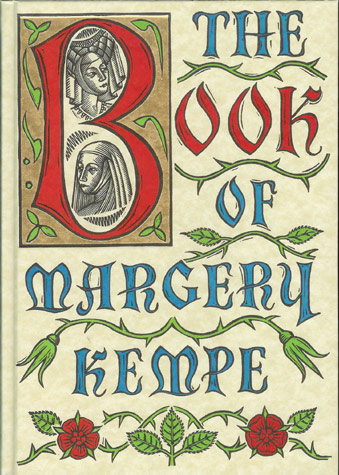 She lived the rest of her life as a holy woman. It was customary at the time for saints, hermits and recluses to write books about their spiritual adventures. She had been considering writing her own book for some time. It is not certain when she began her dictation but the book is written in two parts, each of which was dictated to two different scribes. The first scribe died when the book was two-thirds done. The last event in the first part is John Kempe’s death. The second scribe began work on the book most likely after 1436, when Margery had returned from Danzig. This scribe took about two years to finish the book and then make a fair copy. The date of Margery’s death is unknown but is thought to be in 1438 or thereafter.

The book may have been somewhat popular and copied. In the sixteenth century, excerpts were printed as pamphlets. Then the book disappeared until in 1934, a copy was found in a country house in Lancashire. Margery’s legacy lives on in her book which is unique as it describes the everyday life of a mayor’s daughter in early 15th C. England and is the earliest surviving autobiography in English.

12 thoughts on “Margery Kempe ~Author of a Medieval Autobiography”