Worcester Cathedral from the College Green

A diocese was founded at Worcester in 680 and it is mentioned in the work of Bede. The first bishop of Worcester was Bosel and a cathedral was built during this time. There is no trace of this building now. In 983, St. Oswald founded a Benedictine monastery dedicated to St. Mary which superseded the earlier cathedral. The current crypt dates from this time. Prior Wulfstan was appointed bishop in 1082 and he served at Worcester under the last two Saxon kings and the first two Norman kings. He was responsible for dismantling the old Anglo-Saxon church and starting construction on the present cathedral in 1084. This building was completed in 1089.

During Anglo-Saxon times, Worcester was one of the most important monastic cathedrals in the country. Worcester remained a center of great learning into the later Middle Ages when the Benedictine monks went to university to study many subjects including theology, law, history, mathematics, physics and astronomy. The cathedral library was started in Anglo-Saxon times. It is known that King Offa of Mercia gave a bible to the library in 780. Lady Godiva gave a bible in 1057 but it no longer exists. Wulfstan made sure the library’s documents were organized and kept in the monastery chest. There are still many medieval manuscripts in the cathedral library today.

Two western bays of the nave were rebuilt in the Transitional style circa 1170. In 1175, the central tower collapsed. Bishop Wulfstan was canonized in 1203. Together with St. Oswald, Worcester’s other Anglo-Saxon saint, their bodies were transferred to shrines in the Cathedral. Many pilgrims visited these shrines throughout the Middle Ages, including King John. When King John died in 1216, his request was to be buried in Worcester. The cathedral was damaged by fire in 1202 and required restoration. This was completed in 1218 and the re-consecration was attended by King Henry III, son of King John. 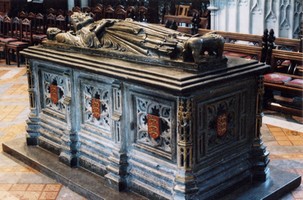 Prince Llewellyn of Wales was married to Eleanor of Montfort at the door of the cathedral in 1278. The wedding was attended by King Edward I of England as well as King Alexander III of Scotland. The rebuilding of the nave was begun in 1317 and in 1374, the present tower was completed. A magnificent north porch was built in 1386. When Arthur Tudor, Prince of Wales died in 1502, he was buried in the cathedral. A Chantry to hold his tomb was constructed and finished in 1516.

The monastery was disbanded during the Dissolution of the Monasteries under King Henry VIII in 1540. During this time, the shrines of St. Oswald and St. Wulfstan were destroyed. Their bones were covered in lead and buried near the High Altar of the Cathedral. Queen Elizabeth I visited the cathedral in 1575. She was entertained with music and then processed under a canopy to the choir where she viewed the tombs of King John and her uncle Prince Arthur Tudor.

Much of the cathedral was damaged by the Parliamentarians during the Civil War from 1640 to 1660. A major program of repair was begun after the Restoration of the Monarchy. From the late seventeenth until the nineteenth centuries, there were several campaigns to restore parts of the cathedral. King George III visited in August of 1788 and heard the music of Georg Frederic Handel. The building had its largest program of restoration under the Victorians from 1857 to 1877. Queen Elizabeth II visited in 1980 and another major restoration project was begun in 1988 and was completed in 2011.