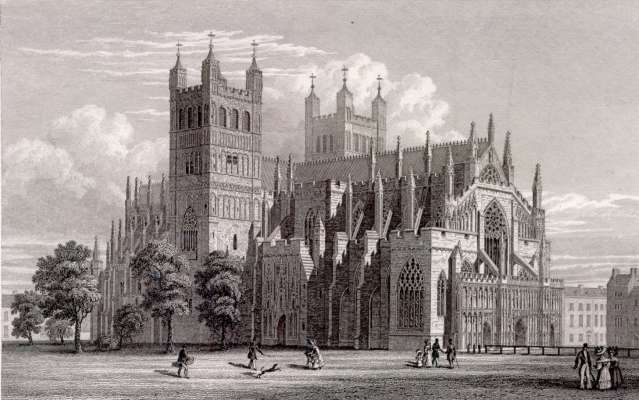 Exeter Cathedral is one of the oldest and most beautiful cathedrals in England. It is also one of the most stylistically consistent medieval cathedrals, another one being Salisbury Cathedral which was used as a model to build Exeter.

This area was occupied by Britons, Saxons, Danes and Normans and the Roman II Augusta Legion camped here. Boniface, the English saint was trained in Exeter in 690 AD and would go on to convert northern Germany to Christianity. Eventually a Saxon minster was built dedicated to St. Mary and St. Peter. There is a record in an eleventh century missal stating that King Aethelstan brought together a collection of holy relics at Exeter, sending emissaries at great expense to the continent to obtain them. These items included a little of the bush in which the Lord spoke to Moses and a bit of the candle which the angel of the Lord lit in Christ’s tomb.

In 1050, this church became a cathedral when the seat of the bishop of Devon and Cornwall was transferred from the town of Crediton to Exeter due to a fear of sea-raids. The minster was used by Exeter bishop Leofric but oftentimes services were held outdoors, near to the site of the present cathedral building. Leofric also started the library by donating sixty-six medieval documents of which only one remains in the cathedral library today, a book of Anglo-Saxon poetry called the “Exeter Book”. William Warelwast, a cleric of Norman origin was appointed as bishop in 1107. He was a royal clerk to King William II (Rufus) and possibly a relative of the king. Warelwast began construction of a new building in the Norman style in 1112. The cathedral was officially dedicated in 1133 but construction took many more years to complete. The imposing towers we see today date from this time and form the majority of what remains of the Norman cathedral.

Rebuilding of the Gothic style cathedral began in 1270 and construction was ongoing until 1369. Unlike other cathedrals, the rebuilding was not due to any disaster such as collapse or fire. Successive resourceful bishops had a desire to make the edifice more up-to-date and more beautiful. It was built entirely of local stone, including Purbeck marble. During this period of building, the West Front, the carved screen on the West Front and the elegant Nave were constructed along with the spectacular stained glass windows. Exeter Cathedral has the longest stretch of unbroken Gothic vaulting in the ceiling in the world. The bishop’s throne and canopy which is 18 m (59 feet) high and can be seen in the quire today was made from Devon oak and was carved between 1312 and 1316.

The cathedral suffered during the Dissolution of the Monasteries under King Henry VIII but since it wasn’t a monastic foundation the damage was not as extensive. The building suffered again during the English Civil War with the Puritans destroying the cathedral cloisters in 1655. Some renovation was performed during the Victorian Era.

In the early morning of May 4, 1942, an air raid was launched over Exeter and the cathedral took a direct hit with a high-explosive bomb. The chapel of St. James and the room above it along with three bays of the aisle and two flying buttresses were completely destroyed. In anticipation of the attack, many of the cathedral’s most cherished articles had been removed, including some of the ancient stained glass, the misericords, the bishop’s throne, the Exeter Book, ancient charters from the reign of King Aethelstan and King Edward the Confessor and other precious documents from the library. Repairs and clearance of the area around the western end of the cathedral resulted in the uncovering of earlier structures such as remains of the Roman city and of the original Norman cathedral. Restoration and conservation work has been ongoing for the structure since the 1950’s.