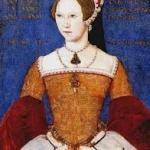 Queen Mary I is a complex figure in history.  She suffered greatly during her childhood.  She had a debilitating illness although she still managed to persevere.  Mary was the first official queen regnant of England and this has left her open to attacks by biased historians who could not tolerate the rule of a woman.  In reality, she did the best she could under the circumstances.

Mary was raised to believe she would be a royal consort and was given very little training to become a sovereign.  Women were not supposed to rule and once they were married, they were compelled to defer to their husbands.  And England would not tolerate a foreign prince as their king.  Her persecution of Protestants resulted in criticism and propaganda against her when in reality, these activities were par for the course in the sixteenth century all over Europe.  There has been a great deal of new scholarship in recent years that puts Mary’s life in a new perspective.

The first thing we must take into consideration is Mary’s mental and physical health.  Mary was frequently ill and is described as ‘crazy’.  People are fascinated by her phantom pregnancies.  From reading historical accounts we can develop a litany of symptoms Mary suffered from the time she was a teenager all the way to her death at age forty-two in 1558.  In addition to these repeatedly frustrating and frequently debilitating illnesses, Mary lived in a state of stress and nervous tension from the time of her father’s decision to extricate himself from his marriage to her mother Catherine of Aragon, which made her ability to deal with her illnesses even more difficult.

It was during this time that she was separated from her mother.  Her father and Thomas Cromwell were badgering her with the aim of forcing her into admitting that she was no longer a princess and her parent’s marriage was null and void.  She lost her own household and was forced to live with her sister Elizabeth.  While living there under the care of Lady Anne Shelton, Mary’s was subjected to ill-treatment if not outright abuse.  Up to that point, Mary had been living a pampered life with a good diet and copious exercise, basking in the love and attention of her parents.  The repeated and prolonged effort to compel Mary into submission soon took a dramatic turn.

When Mary entered puberty at the age of fourteen, she began to suffer from pains in her head and stomach.  There would be intervals in her life she couldn’t keep down her food for eight or ten days.  In these instances, her mother’s apothecary and physician were called in to treat her.  She was diagnosed with “strangulation of the womb”.  This covered a wide range of symptoms that included amenorrhea (the irregularity or cessation of menstrual periods), a depressed mental state indicated by heaviness, fear and sorrowfulness, difficulty breathing and pain and swelling of the abdomen.  Other signs of the illness were headache, nausea, vomiting, and lack of appetite, trembling of the heart, fainting, melancholy and fearful dreams.

Mary’s illnesses did not appear with a consistent pattern or conform to a known disease.  Her bouts of amenorrhea and melancholia were basically seasonal with the greatest severity in the fall and early spring but it could also occur in the summer and winter.  The usual symptoms did not appear every year and could vary widely with each event.  News of Mary’s frequent illnesses traveled throughout the kingdom and over to the continent.  Her health had a deleterious effect on her marriage prospects.  Ambassadors and those who were deliberating about making a match with her wondered about her ability to bear children.

While Mary was under this enormous pressure, she wrote to Cromwell in a letter, mentioning she was having headache, toothache, neuralgia and insomnia.  Treatments prescribed would have included tooth pulling and bloodletting from her foot or other areas of the body.  The bloodletting could have led to anemia.  Mary finally did sign her submission on June 22, 1536 and was admitted into her father’s household but she continued to suffer all of these symptoms, including through the years of her reign as queen.  Added to these symptoms were the episodes of phantom pregnancies.

One theory regarding Mary’s phantom pregnancies points to a condition known as ovarian dropsy.  In this condition, a cyst forms on the ovary and gradually enlaces itself until it becomes, in some instances, a great size and fills with fluid.  Cysts can be painful and produce widespread abdominal pain.  The causes of the dropsy are obscure.  In some cases, the condition can be attributed to inflammation of the ovary.  The ovary can also be subject to the growth of various other tumors such as fibrous or cancerous tumors and also cause deformation of the ovary, leading to infertility.  Ovarian dropsy usually lasts for a few years.

She may also have had what is called a Prolactinoma Pituitary Tumor.  Dr. Milo Keynes wrote an article on this subject for Journal of Medical Biography in 2000.  After careful consideration of the historical evidence, Keynes believed Mary’s symptoms indicated a tumor on the pituitary endocrine gland.  These tumors are typically benign and can press on surrounding structures such as the optic nerve, leading to blindness and headache.  The gland will also create an over-secretion and under-secretion of hormones.  In this case, the hormone involved is prolactin.  In excess, prolactin can cause infertility, amenorrhea, infrequent and irregular uterine bleeding and galactorrhea (swollen breasts that secrete milk).  The tumor can also cause depressive disorders.

Most significantly, as in Mary’s case, patients with this type of tumor have been diagnosed with pseudocyesis or “phantom pregnancy”.  A non-pregnant woman has a delusional belief that she is with child.  The patient will manifest the signs of pregnancy such as weight gain, increase in abdominal girth, the sensation of fetal movement, vomiting, nausea, aberrations of appetite and galactorrhea.

Enlargement of the tumor can also affect the function of the thyroid gland and create the condition of hyperthyroidism.  Symptoms include rough, deep voice, loss of hair and eyebrows, flushing of the cheeks, dryness and thickening of the skin, constipation resulting in an extended abdomen, increase in weight, chronic anemia, headaches, depression and mental confusion.  As there is a high probability Mary had this type of tumor, this would explain her mental and physical state from the time of her teenage years and go a long way in explaining her behavior.

Bloody Mary – Mary’s mission to return England to the Catholic Church, how she got her sobriquet and the execution of Protestants during her reign

If there’s one thing we know about Queen Mary I, it’s the strength of her convictions regarding her faith and her sincere desire to return England to the Roman Catholic Church.  Her fellow Catholics held Mary in great esteem and she was admired for her piety and religious fervor.  It is unfortunate that Mary’s convictions resulted in her reputation and character being tarnished by Protestant writers such as John Foxe.  Foxe’s book “Actes and Monuments of these Latter and Perillous Days, Touching Matters of the Church”, popularly known as “Foxe’s Book of Martyrs”, gave detailed accounts of the deaths of every Protestant martyr who died for his or her faith.

Foxe’s book was first published in 1563, five years after Mary’s death.  Four editions were published even during Foxe’s life, signifying how prevalent the book was.  The work included accounts of the lives of the early Christian martyrs, the medieval Inquisition and the suppressed Lollard heresy.  But it received the greatest attention and notoriety for its descriptions of the oppression carried out during Mary’s reign.  The book was filled with custom-made, highly detailed woodcuts portraying the gruesome torture and burning of Protestant martyrs, including the flames of the fires.  In the first edition of the book, thirty of the fifty-seven illustrations portrayed the executions under Mary’s reign.  This greatly contributed to Mary earning the sobriquet “Bloody Mary”.

Burning at the stake was the standard punishment for heresy in sixteenth century Europe.  In an effort to root out heresy, Mary’s government expanded the search for heretics, resulting in the execution of two hundred and ninety people, predominantly from the lower classes in south-east England.  These public executions by burning were decidedly unpopular and Mary’s advisers debated as to whether they were effective or even truly necessary.

There is a question, even to this day, as to who was responsible for these unfortunate events as there is a lack of conclusive evidence and those who wrote about the events tried to deflect blame.  It is clear  the Pope, her husband, King Philip II of Spain and Mary’s cousin, Cardinal Reginald Pole, Archbishop of Canterbury were advocating the return of the English Church to Catholicism.  While there is no specific material evidence of Mary’s participation in ordering the executions, other than that of Archbishop Cranmer, the fact remains Mary could have halted the burnings, and did not.

We must take into consideration that other medieval and early modern rulers were responsible for many deaths for religious reasons and Mary was only emulating her peers.  Religious discontent was equated with dissatisfaction with the government and politics and therefore was viewed suspiciously and recognized as a threat to the monarchy.

Mary’s husband, King Philip II of Spain, oversaw and tolerated the work of the Spanish Inquisition in the Iberian Peninsula.  Her cousin, Holy Roman Emperor Charles V, was responsible for tens of thousands of deaths while perpetrating religious wars against the Protestants in his domains.  There were innumerable deaths in France during a prolonged and complicated series of religious wars.  In light of this, while any number of deaths is inexcusable, the number of deaths in England were comparatively low in relation to other parts of Europe.

At the time of Mary’s death, there were problems internally that were outside of her control.  A terrible plague of influenza swept the country.  There were excessive amounts of rainfall in England which destroyed the crops and caused famine.  The unfortunate loss of Calais along with religious conflict heightened the troubled political climate.  Perhaps the most detrimental decision made by Mary was her unfortunate choice of husband, a foreign prince who tried to force England into unnecessary war on his behalf.

In summation, while there were these unfortunate deaths during Mary’s reign, there were internal and external extenuating circumstances.  Mary’s illness colored her view of the world.  Even so, there were many in her personal household who loved Mary and were extremely loyal to her.  She demonstrated numerous public acts of piety during her reign, endearing her to the people.  She restored the navy, introduced policies of fiscal reform, established new hospitals and improved the education of the clergy.  There were those who advised her to disinherit or even kill her sister Elizabeth who was her legal heir.  But Mary resisted this advice and there was a peaceful transition of the throne to Elizabeth after her death.  Mary undoubtedly paved the way for Elizabeth’s reign in demonstrating that a woman could undeniably rule effectively as a monarch.

Further reading:  “Bloody Mary” by Carolly Erickson, “Mary Tudor:  The Spanish Queen” by H.F.M. Prescott, “The Myth of Bloody Mary” by Linda Porter, “The Aching Head and Increasing Blindness of Queen Mary I” by Dr. Milo Keynes in the “Journal of Medical Biography”, 2000, Volume 8, pages 102-109, “Mary I:  England’s Catholic Queen” by John Edwards, “Mary Tudor:  Princess, Bastard, Queen” by Anna Whitelock, entry on Mary I in the Oxford Dictionary of National Biography written by Anne Weikel, “Philip of Spain” by Henry Kamen, “Imprudent King:  A New Life of Philip II” by Geoffrey Parker