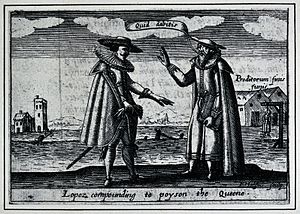 Queen Elizabeth I of England suffered from intermittent fevers, a bothersome leg which caused her to limp occasionally and incessant rumors of female troubles among other illnesses. But overall she was in good health and lived to the ripe old age of seventy. Because she lived so long and had many ailments, it was necessary to have a large staff of physicians to deal with the aging monarch.

The older Elizabeth got, the thinner she got. One physician examined her in 1566 and was so alarmed by her skeletal appearance he feared she was becoming consumptive and developing kidney stones. Many royal doctors did not want the responsibility for keeping such a frail woman alive believing she was too fragile and weak. But she would have the last word as she outlived all of them.

Records reveal there were at least fifteen physicians and seven surgeons in the household of Queen Elizabeth. The doctors were usually paid £100 in board and received other perks, benefits and gifts. Three of these men: John Caius, Caesar Dalmaris and Thomas Vicary were part of Queen Mary I’s household. Dr. Robert Huicke had treated Elizabeth as a princess living in Hatfield. He would remain in her service when she became Queen and be the first doctor to be named physician-in-ordinary. Other doctors were new to the Queen and she showed preference to those who attended Oxford and Cambridge for their training. One exception was Dr. Rodrigo Lopez.

Rodrigo Lopes was born c. 1517 in Crato, Portugal. His family were Jewish but had been forced to convert to Catholicism in 1497. They were considered ‘Converso’ or ‘New Christian’ because of this. His father was physician to King John III of Portugal. Lopes studied at the University of Coimbra, receiving a BA in February 1540 and an MA in December 1541. He enrolled in medicine and graduated in 1544. Lopes came under suspicion of the Portuguese Inquisition and fled to England in 1559, settling in London where he managed to pass the licensing requirements to become a physician.

The fact that he was Portuguese and Jewish did not hinder his professional success. He changed his name from Rodrigo Lopes to Ruy or Roger Lopez. He chose to be baptized and became a member of the Church of England. There is evidence his family did practice Jewish rites at home. In 1563, Dr. Lopez married Sarah Anes, the eldest daughter of a Portuguese refugee from the Inquisition who was a successful merchant in London. The couple had four sons and two daughters. One of Dr. Lopez’ brothers also lived with the family.

Lopez was admitted into practice at St. Bartholomew’s Hospital in 1567 and rose to the position of chief physician. He was paid forty shillings per annum plus lodging and coal for his fires. He practiced medicine according to Galenic principals and was adept in diet, purges and bleedings. Some of his colleagues wrote of how impressed they were with Lopez’ skills. He was known for prescribing medicinal concoctions made with sumac and anise seed which were very effective. With these skills he quickly rose in prominence.

He was asked to give the anatomy lectures at the College of Physicians in 1570 but turned down the assignment. The Fellows of the College fined him for his refusal of the job and this caused resentment towards him. Also in 1570, the Fellows required him to return £7 he had received for healing a man with a swollen tibia. They had come to the conclusion Lopez had done nothing to treat the patient.

Despite these setbacks, he came to the attention of high society. Dr. Lopez was engaged by Sir Francis Walsingham for treatment and was appointed as a medical advisor to the Queen’s favorite, Robert Dudley, Earl of Leicester. He would later treat Leicester’s stepson, Robert Devereux, Earl of Essex.

In 1580, King Henrique of Portugal died. King Philip II of Spain invaded Portugal and took the throne. Due to war with Spain, Queen Elizabeth’s government supported and offered asylum to many enemies of King Philip. One of these was the bastard pretender to the Portuguese throne, Dom Antonio who was harbored at Eton College near Windsor Castle.

As Dom Antonio went about trying to raise support for his cause, Dr. Lopez became an intermediary between the Queen’s government and the main circle of Portuguese émigrés. Dr. Lopez spoke five languages and worked as an agent of intelligence first for Walsingham and when he died, for Lord Burleigh. He was known to be intensely implicated in diplomatic intrigue. He also conducted a clandestine correspondence with the court of Spain but he would always insist this was at the behest of Walsingham.

Lopez built up a sizable practice and had a fine home in Holbern. His son attended Winchester College and his father-in-law held the position of Purveyor and Merchant for the Queen’s Grocery. One of his wife’s relatives was vizier to the Sultan in Constantinople and worked as the main contact for England in the Sublime Porte. Lopez became Elizabeth I’s chief physician in 1586 with a pension of £50 per annum. Three years later, the Queen granted Lopez a monopoly for importing sumac and anise seed to England. In 1588, the Queen gave Lopez land and tithes in Worcestershire.

Portuguese agents consistently lodged in Lopez’ London home. Eventually, the Portuguese communications with the Spanish ambassador in Spain were intercepted by Elizabeth’s government. There was no concrete evidence that Lopez conspired against the Queen herself but the evidence would not work in his favor. In 1593, at a party one night at Essex House, Lopez had a conversation with Dom Antonio and Philip II’s former secretary António Perez, who lived in the house. For some inexplicable reason, Dr. Lopez imprudently discussed the sexual tastes of the Queen’s favorite Robert Devereux, Earl of Essex and told the men what diseases he had treated the Earl of Essex for, mentioning a sexually-transmitted disease. It is not known if Lopez did this intentionally but Perez reported this conversation to Essex.

Essex was understandably irate, and considering it slander, vowed revenge on the doctor. He began to gather incriminating evidence. Two Portuguese agents implicated Lopez while under torture, saying he was plotting to poison the Queen. Some letters appeared, probably forgeries, implicating Lopez in foreign plots. Lopez maintained his innocence, insisting Walsingham knew of his plans to double-cross Spain. However by this time Walsingham was dead and not available to confirm his story.

Essex had Lopez detained in his home of Essex House where the Earl, Robert Cecil and Lord Burleigh questioned him. He convinced the Cecil’s of his innocence and Lord Burleigh especially considered the allegations preposterous. Queen Elizabeth admonished Essex for his suspicions. She chided him to his face saying he was “a rash and temerious youth, to enter into the matter against the poor man, which he could not prove, but whose innocence she knew well enough”.

Essex was furious and locked himself in his chamber for two days. He would only emerge when Elizabeth agreed he could pursue his charges. Essex did not give up. He had Lopez transferred to the Tower where he underwent further threatening examination. Other Portuguese agents said Lopez wrote letters to Spain and agreed to murder the Queen for a payment of fifty thousand crowns. When confronted with this evidence, Lopez confessed. He later retracted his confession but by then the damage was done.

Lopez underwent a trial in the Guildhall on February 28, 1594. It was special commission led by Essex and Dr. John Dee testified against Lopez, perhaps as a favor to Essex. Lopez stated he had been tortured, vehemently denied any plot and maintained his innocence but Englishmen found it hard to believe a Jew from Portugal. Indeed, the prosecutor Sir Edward Coke called Lopez “a perjured, murdering villain and Jewish doctor worse than Judas himself…[not] a new Christian..[but] a very Jew.” This convinced the commission and Lopez was found guilty of treason.

The Venetian ambassador heard that Queen Elizabeth still supported Lopez even after his conviction and summoned him out of prison to treat her in March of 1574. There was a long delay in the signing of the death warrant but the Queen finally confirmed the sentence. On June 7, Lopez was taken to Tyburn Hill along with two other men. Lopez professed he loved the Queen as he loved Jesus Christ to the derision of the crowd. Lopez was hanged, drawn and quartered along with the others and their quarters were hung on the city gates. Lopez was the only doctor to be executed in England.

It seems obvious anti-Semitism played a part in Lopez’ conviction. But the Queen appears to have still held the doctor in high esteem and may have felt some guilt over his death. Because of Lopez’ attainder, his property was forfeited to the crown. However, the Queen allowed Lopez’ widow Sarah and his family to retain a beneficial lease and all of his assets. She also subsidized the doctor’s son at Winchester by giving him a grant of a parsonage of £30 per annum. The debate over Lopez’ innocence or guilt rages even today. It is believed that Lopez was the inspiration for the character of Shylock in Shakespeare’s “Merchant of Venice”.

Further reading: “The First Elizabeth” by Carolly Erickson, “The Royal Doctors 1485-1714: Medical Personnel at the Tudor and Stuart Courts” by Elizabeth Lane Furdell, “Elizabeth I” by Anne Somerset, “The Double Life of Doctor Lopez: Spies, Shakespeare and the Plot to Poison Elizabeth I” by Dominic Green, entry on Roderigo Lopez in the Oxford Dictionary of National Biography by Edgar Samuel