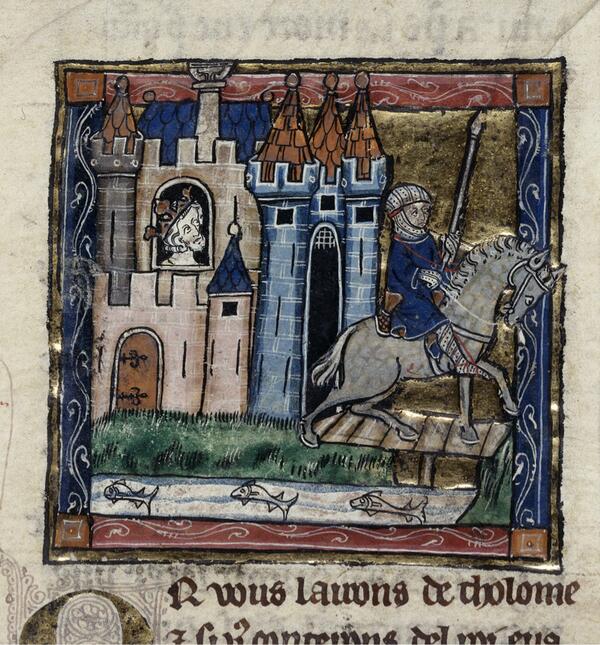 “..and men said openly that Christ and His saints slept..” Quote from the Anglo-Saxon Chronicle regarding the Anarchy of twelfth century England

The Treaty of Wallingford, for all intents and purposes, ended the civil strife of twelfth century England which some historians have christened the “Anarchy”. It didn’t exactly change the course of English history. It was more of a redirection.

King Henry I, the youngest son of William the Conqueror, had been a strong and effective king. When his only legitimate son William Adelin died in a horrific shipwreck in 1120, Henry’s only remaining legitimate child was his daughter Matilda. She had been married to Emperor Henry V of Germany at the age of eleven. She lived there until the Emperor died and then returned to her father who arranged for her to marry Geoffrey, Count of Anjou. Henry had his noblemen and clergy swear an oath of loyalty to Matilda on three separate occasions, recognizing her as his heir to the throne of England. Despite the oaths, there is a possibility Henry was grooming Matilda to be a Queen Mother rather than a Queen Regnant. When Henry died in December 1135, he may have had a change of heart. There were men who attended him on his deathbed who swore he wanted his favorite nephew Stephen of Blois to be king.

Matilda was pregnant when her father died and either unwilling or unable to press for her right to the English throne. Stephen rushed to England and claimed the throne. The nobles and clergy were not keen on having a woman as ruler and they definitely didn’t trust her husband the Count of Anjou whom they considered a foreigner. Many of them had reservations about reneging on their oath to Matilda yet Stephen was acclaimed king and crowned.

Almost immediately Stephen ran into resistance, especially from Henry I’s illegitimate son Robert of Gloucester who coordinated attacks around England in support of his half-sister Matilda. This was the beginning of many long years of fighting in the kingdom. The warfare included few pitched battles. Noblemen would switch sides whenever it was convenient and to their advantage and the king could never rely on anyone for complete loyalty and support. There were sieges and counter-sieges, castles and counter-castles were built, villages and churches were burned to the ground. England experienced famine and foul weather. Sometimes a town would surrender to make peace but the neighboring castle would keep fighting. The King of England wasn’t strong enough to complete his victory. At one point, Matilda gained custody of Stephen but had failed to be crowned queen due to her haughty manner and unpleasant temper.

Matilda gave up her personal fight for the throne in early 1148 when she withdrew from England and retired to Normandy. Her husband, Geoffrey had completed a systematic conquest of the duchy of Normandy while King Stephen was occupied with fighting civil war in England. Even before Matilda left, her eldest son Henry had come to press his own claims. His four forays into England had been largely unsuccessful if not humiliating. Stephen’s son Eustace also participated in the warfare, setting traps and thwarting Henry at every turn.

Geoffrey of Anjou died 1151. Henry was now Duke of Normandy and Count of Anjou in his own right and came to England with a small number of troops in 1153. He set about with the same type of warfare used during the Anarchy with limited success. Stephen concentrated his efforts on the Angevin stronghold of Wallingford. The garrison held on tight but were running out of food. Henry brought his forces to help relieve the castle but could not break the blockade. Stephen knew Wallingford was the last bastion in his struggle to keep the throne of England and called up a large force that included his son Eustace. On two occasions the troops of Stephen and the troops of Henry faced each other on either side of the Thames River and twice battle was avoided.

The nobles on both sides were not prepared to rely on the outcome of a pitched battle when the possibility of a negotiated settlement was achievable. At this point, even the most loyal supporters of King Stephen believed Henry should be accepted as Stephen’s heir. Both men knew the possibility of treachery in their troops and a five day truce was agreed. Henry and Stephen met privately, each man on the opposite banks of a stream. Both of them complained bitterly of the disloyalty of their nobles. Henry was allowed to destroy Stephen’s counter-castle of Crowmarsh and mediators began working on more lasting terms. Eustace withdrew greatly vexed and angry. In his opinion, the war had not reached a proper conclusion.

The truce did not last long. Ready for revenge, Eustace attempted to lure Henry into a pitched battle and spread destruction all over Cambridgeshire. But then Eustace died suddenly on August 17. Stephen had a younger son William but at this point, Stephen’s resolve had been broken. Stephen and Henry’s armies approached each other at Winchester and it was agreed that a more lasting peace was required.

Stephen and Henry appeared at Winchester on November 6, 1153 in a public show of reconciliation. Peace was made on the following terms. Both sides were to lay down their arms. Stephen acknowledged before the assembled barons, earls and other magnates that Henry had a hereditary right to the kingdom of England. Henry generously conceded Stephen should retain the kingdom of England for the rest of his life provided the king, the bishops and other magnates bind themselves by an oath that Henry, if he survived, should succeed to the kingdom peacefully and without denial.

The terms required that lands which had fallen to intruders be restored to their former and legitimate owners who held them in the time of King Henry I. Any castles which had been erected since the death of Henry I were to be destroyed. Law and order was to be reestablished according to the old customs. All mercenary troops were to be sent home. These terms became known as the Treaty of Wallingford or the Treaty of Winchester. Stephen marked the implementation of the treaty by leading Henry in a procession through the streets of Winchester and again later through London. This agreement formed the basis for a settlement only. The exact terms and further stipulations were confirmed in a charter issued by Stephen at Christmas.

The charter declared Stephen had adopted Henry as his son and heir and that Henry had sworn homage to him and swore allegiance as long as Stephen was alive. Henry confirmed Stephen’s son William held the honors his father had bestowed on him, the properties he owned by right of his marriage to the daughter of the Earl of Warenne and agreed to restore to William the castles belonging to the honor of Mortain in Normandy. William never advanced a claim for the throne of England.

All of Henry’s vassals did homage to Stephen and Stephen’s men did homage to Henry, saving only the fealty they owed the king as long as Stephen lived. Custodians acceptable to Henry and Stephen were entrusted to watch over the primary castles of the Tower of London, Windsor, Oxford, Lincoln, Winchester and Southampton and they were to turn these castles over to Henry upon Stephen’s death. If any of these custodians rebelled, both Henry and Stephen were to wage war until the rebels gave them satisfaction. Stephen promised to act with the advice of Henry except in his right to exercise royal justice throughout the realm.

Although the kingdom rejoiced in the prospect of peace offered by the Treaty of Wallingford and the charter of Winchester, the relationship between Henry and Stephen began to show strain by January of 1154. Henry complained that Stephen was not destroying the castles according to the treaty. The lands that were supposed to be restored to the owners from King Henry I’s time came to be disputed and rival claims would beleaguer Henry for his entire reign as king. Because the treaty mentions Henry would become king “if he survived”, rumors began to circulate regarding plots to kill Henry. Henry decided to retire to Normandy and left by Easter.

Henry was in Normandy besieging the castle of Torigny when word reached him that Stephen had died on October 25. He finished reducing the castle, put his affairs in Normandy in order and then was forced to wait for favorable winds to cross the Channel. Consequently, England was without a ruler for six weeks but peace prevailed. On December 7, Henry and his wife Eleanor of Aquitaine left Barfleur. On December 19, 1154, Henry and Eleanor were crowned king and queen at Westminster Abbey by Archbishop Theobald of Canterbury.

Further reading: “Stephen and Matilda: The Civil War of 1139-1153” by Jim Bradbury, “The Empress Matilda: Queen Consort, Queen Mother and Lady of the English” by Marjorie Chibnall, “Henry II” by W.L. Warren, entry on Eustace, count of Boulogne in the Oxford Dictionary of National Biography written by Edmund King

5 thoughts on “Enter the Plantagenets ~ The Treaty of Wallingford, 1153”