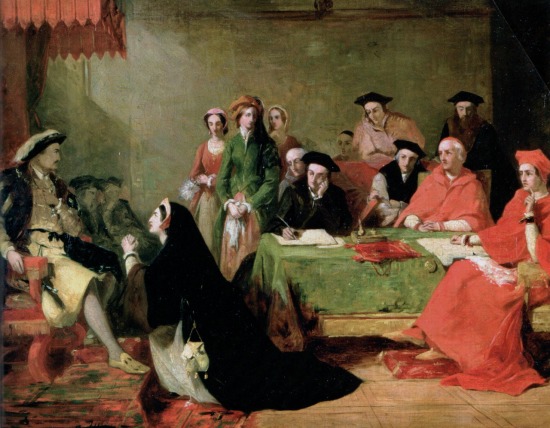 In researching history, I find there are some really dramatic occasions. Catherine of Aragon’s speech at the Legatine Court of Blackfriars on June 21, 1529 is one of those moments. King Henry VIII was hell bent on marrying Anne Boleyn and was in search of any means available to extricate himself from his marriage to Catherine of Aragon. Catherine, being the proud daughter of their Most Catholic Majesties Queen Isabel and King Ferdinand, would be her own most staunch advocate.

Henry VIII had asked Pope Clement for an annulment of his marriage to Catherine. But before he could do this, in May of 1527, Rome was sacked by the Imperial troops of Holy Roman Emperor Charles V, who just happened to be Catherine’s nephew. The Pope was to spend the rest of his life avoiding conflict with Charles. He was compelled to make decisions that would not offend the Emperor even though this resulted in reducing the power of Papacy. Also, according to church doctrine, a valid contractual marriage could only be dissolved by death. And the Papacy had issued a dispensation for the marriage of Henry and Catherine. It was not in the Pope’s power to annul a marriage where an impediment had already been dispensed.

In April of 1528, Pope Clement issued a papal bull giving Cardinal Wolsey the authority to handle the King’s Great Matter in England. He also dispatched the aging and ailing Cardinal Lorenzo Campeggio to England to look into the claims. However, the Pope had instructed the Cardinal to delay any decision as long as he could so as not to offend the Queen’s nephew, the Emperor. Campeggio’s journey took many months. A Legatine Court was finally convened in June of 1529 to hear the arguments regarding the annulment. 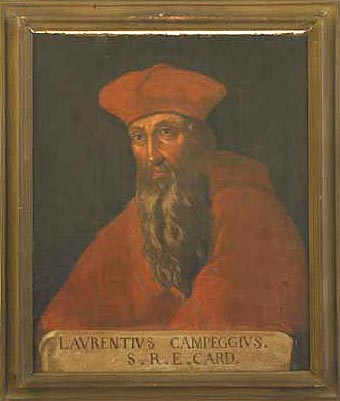 Both the King and Queen were in attendance on June 21. Although the chronicles make it difficult to know the exact sequence of events, it appears that Henry made his arguments first. It was then Catherine’s turn to speak. We can only imagine how long she worked and prepared for this moment to plead her case to the public and in front of the king. Indeed, she placed herself on her knees in front of Henry and spoke these words:

“Sir, I beseech you for all the loves that hath been between us, and for the love of God, let me have justice and right, take of me some pity and compassion, for I am a poor woman and a stranger born out of your dominion, I have here no assured friend, and much less indifferent counsel: I flee to you as to the head of justice within this realm. Alas! Sir, wherein have I offended you, or what occasion of displeasure have I designed against your will and pleasure? Intending (as I perceive) to put me from you, I take God and all the world to witness, that I have been to you a true and humble wife, ever conformable to your will and pleasure, that never said or did anything to the contrary thereof, being always well pleased and contented with all things wherein ye had any delight or dalliance, whether it were in little or much, I never grudged in word or countenance, or showed a visage or spark of discontentation. I loved all those whom ye loved only for your sake, whether I had cause or no; and whether they were my friends or my enemies. This twenty years I have been your true wife or more, and by me ye have had divers children, although it hath pleased God to call them out of this world, which hath been no default in me.

And when ye had me at the first, I take God to be my judge, I was a true maid without touch of man; and whether it be true or no, I put it to your conscience. If there be any just cause by the law that ye can allege against me, either of dishonesty or any other impediment to banish and put me from you, I am well content to depart, to my great shame and dishonor; and if there be none, then here I most lowly beseech you let me remain in my former estate, and received justice at your princely hand. The king your father was in the time of his reign of such estimation through the world for his excellent wisdom, that he was accounted and called of all men the second Solomon; and my father Ferdinand, King of Spain, who was esteemed to be one of the wittiest princes that reigned in Spain many years before, were both wise and excellent kings in wisdom and princely behavior. It is not therefore to be doubted, but that they were elected and gathered as wise counsellors about them as to their high discretions was thought meet. Also, as me seemeth there was in those days as wise, as well-learned men, and men of good judgement as be present in both realms, who thought then the marriage between you and me good and lawful Therefore is it a wonder tome what new inventions are now invented against me, that never intended but honesty. And cause me to stand to the order and judgment of this new court, wherein ye may do me much wrong, if ye intend any cruelty; for ye may condemn me for lack of sufficient answer, having no indifferent counsel, but such as be assigned me, with whose wisdom and learning I am not acquainted. Ye must consider that they cannot be indifferent counsellors for my part which be your subjects, and taken out of your own council before, wherein they be made privy, and dare not, for your displeasure, disobey your will and intent, being once made privy thereto. Therefore, I most humbly require you, in the way of charity, and for the love of God, who is the just judge, to spare the extremity of this new court, until I may be advertised what way and order my friends in Spain will advise me to take. And if ye will not extend to me so much indifferent favour, your pleasure then be fulfilled, and to God I commit my case!”

Catherine is invoking the memory and the value of their longtime relationship. She pleads that she is a woman and a foreigner having no friends. Unable to get unbiased counsel, she is appealing to the king as the head of justice in England. She asks how has she offended him? She was a loyal and obedient wife, loving all the people that the king loved, whether they were her friends or her enemies. She reminds Henry that they had many children but God saw fit to take all of them away except for their daughter Mary. She says these deaths were not her fault.

Catherine reiterates that she was a virgin when she married Henry. She says if she has broken the law, then she deserves whatever treatment she gets. But if she hasn’t, she asks to be restored to her former estate. Being very shrewd, she refers to Henry’s father, King Henry VII and how wise he was, as wise as Solomon. She also refers to her own father King Ferdinand and how these sagacious kings brokered their marriage believing it was valid and lawful. How could he bring up these invented regulations against her when she was acting in all honesty? Why did he intend to cause her harm and subject her to cruelty?

She says she will be accused of not giving sufficient answers to Henry’s claims. The blames for this, she believes, is because she doesn’t have objective advisors. She doesn’t trust the king’s advisors because they will not go against Henry’s will. She doesn’t believe she will get a fair hearing on her case in this court and requests more time to consult with her friends in Spain on how to proceed. If he will not agree to her request, that is his prerogative and she will appeal her case to God.

During her speech, Henry tried twice to have her rise off her knees. She never wavered. When she was finished, she did not go back to her original seat but walked out of the court on the arm of Master Griffith, her General Receiver. Henry demanded she be called back into court. The crier called out “Catherine Queen of England, come into the court”. Master Griffith turned to Catherine saying they were calling her back into the court. Her response was “On, on, it maketh no matter, for it is no indifferent court for me, therefore I will not tarry: go on your ways”. And Catherine departed never to appear in any court again.

Catherine did file an appeal to Rome as she promised. On June 28, John Fisher, Bishop of Winchester delivered a speech saying Catherine and Henry’s marriage was holy and good and could only be dissolved by God. This speech would eventually cost Fisher his life. Campeggio offered no definitive judgement and dissolved the court on July 31, saying it would meet again in October. The court was never reconvened. Catherine’s dramatic speech had won the battle in the short term but she lost the war. Becoming exasperated with Rome, Henry eventually broke with the Catholic Church and declared himself the head of the church in England, allowing him to annul his own marriage to Catherine and wedding Anne Boleyn.