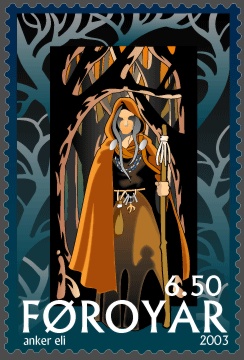 During pagan times in Scandinavia, women were the chief practitioners of magical medicine. The Eddic poems reference many instances of incantations, usually chanted by females. These charms are not written down so we don’t know if they were meant to cure particular ailments or restore good fortune in general. There were several categories of pagan priests, soothsayers or those who recited incantations, as well as a subordinate echelon of individuals who made a living practicing magic arts and powers. Among these individuals was a category called a vǫlva, a type of female seer who appears in poetry and prose.

The term vǫlva is translated as “prophetess” or “sibyl” and comes from the root word that means “magical staff”. Many times in Norse literature these female prophets are depicted carrying a staff. In the sagas, the vǫlva travels from farm to farm, sometimes with an entourage answering questions about the future such as the outcome of the coming farm season or men’s destinies. The vǫlva is greeted respectfully and a feast would be celebrated in her honor. Before replying to a specific question, the vǫlva would go into a trance or dream state and summon spirits, usually sitting on a stage. Her assistants would accompany her, singing chants and incantations. After the chants, she would pronounce her prophecies of good fortune and respond to questions.

One of the fullest accounts of this type of séance comes from the “The Saga of Eirik the Red” written in the late thirteenth century which recounts events in the settlement of Greenland in the beginning of the eleventh century. Although this account may have been fiction, the author seems to have knowledge of these events and processes.

The writer tells us there was a woman in Greenland, a vǫlva named Ƿorbjörg, who went from farm to farm in the winter to answer questions about the coming harvest and men’s fate and fortunes. The prior season had been particularly bad and men were especially anxious to know the outcome of the upcoming harvest. The greatest farmer in the area named Ƿórkell invited Ƿorbjörg into his home. A high seat was prepared for her and a cushion filled with hen feathers placed on the chair.

The “Saga” describes her appearance:
She was wearing a blue strapped cloak, all set with stones down to the hem; she had glass beads round her neck, and on her head a black lambskin hood with the lining of white catskin; and in her hand she had a staff with a knob on it, which was mounted with brass and had stones set in it round the base of the knob. She had a belt of touch-wood round her, and on it was a large skin pouch in which she kept her charms which she had to have for her magic. She had hairy calfskin shoes on her feet, and long shoelaces with big tin knobs on the ends; she had on her hands gloves of catskin, white inside, and hairy.

She was given a special dish of porridge made of kid’s milk and another dish made of hearts of all the living creatures available. When the feast was over and the tables removed, farmer Ƿórkell asked Ƿorbjörg how she liked his household and when would he know the answers to his questions. She said she would have the answers the next day and requested a female helper who could chant the Warlock-Song. There was a woman in the crowd who knew the chant and was persuaded to participate.

The next day Ƿorbjörg mounted the platform which women had surrounded in a ring. The séance began. The helper sang the chant beautifully and everyone commented on how well it was sung. After the chant ended and the spirits were summoned, the vǫlva voiced her prophecies of good fortune and answered everyone’s questions. She then departed for the next farm.

Further reading: “Viking Age: Everyday Life During the Extraordinary Era of the Norsemen” by Kirsten Wolf, “Everyday Life in the Viking Age” by Jacqueline Simpson, The Viking Answer Lady: Women and Magic in the Sagas: Siedr and Spa