It was the early eleventh century and England was being overrun by Vikings. Parts of the country were in the hands of the Danes and they were trying to acquire more. King Aethelred, known as the “Unready”, was weak and ineffectual in fighting off the threat. His son Edmund had watched what was happening and when the time was right, he decided to take action. The Anglo-Saxon Chronicle says King Edmund II was called Ironside because of his valor.

Edmund was born c. 988. He was the son of King Aethelred II of England. His mother was Aelfgifu, Aethelred’s first wife. We know little of Edmund’s childhood. Edmund may have lost his mother at a young age and was probably brought up with his siblings by foster mothers and his grandmother Aelfthryth, mother of King Aethelred. Aethelred took a second wife, Emma of Normandy in 1002. Emma had two sons, Alfred and Edward (later King Edward the Confessor).

On St. Brice’s Day, November 13, 1002, Aethelred ordered a huge massacre of Danes in the area of northern England called the Danelaw. During the massacre, the sister of Sweyn Forkbeard, King of Denmark and Norway was killed, leading to a personal vendetta. From 1002 to 1009, Sweyn and his Danish armies marched up and down England with little interference, torturing the local people, plundering and killing. From 1009, Sweyn brought his largest army yet and stayed in England. There was some resistance from the English but eventually, Sweyn took his army north to the Danelaw which he overran into submission.

Aethelred only led his army in person three times during his reign. Not only that, he didn’t appoint loyal and competent leaders to fight for him. He was all too ready to pay monstrous sums of Danegeld to get the Vikings to leave England. There was a powerful nobleman in England at the time named Eadric Streona, ealdorman of Mercia. He was a ruthless turncoat whose double dealing allowed him to remain a leader for ten years under successive kings; Aethelred, Edmund, Sweyn and Sweyn’s successor, Cnut. Aethelred stayed loyal to Eadric and other untrustworthy noblemen. Its possible Edmund may have fought in the wars against Sweyn and his armies from 1010-1013.

After Sweyn took control of the Danelaw other parts of England began to fall to the Vikings. The whole country, including the last stronghold of London submitted to Sweyn and recognized him as king. Aethelred, Emma and their two sons fled to Normandy. Where were Edmund and his brothers? The record doesn’t state they went to Normandy with their father. The boys may have remained in reliable parts of Mercia, Northumbria or Wessex, out of reach of Sweyn and his army. The truth is we don’t know where they were but we do know they survived.

Sweyn was king for only a few weeks when died on February 3, 1014. The Danish fleet in the Thames elected Sweyn’s son Cnut king but the Witanagemot (commonly known as the Witan, noble councilors to the King) had decided to ask King Aethelred back. He made his way to England in the spring and decided to lead his army against the enemy.

Aethelred acted with uncharacteristic speed and resolve, attacking the Danelaw. Cnut took his troops out to sea. Finding no Danes to fight, Aethelred took revenge on the Danelaw province of Lindsey which had harbored Cnut, burning and pillaging. Cnut went south with some hostages he had taken earlier. He returned the hostages without their ears, hands and noses and then went back to Denmark.

Edmund emerges as a leader in 1015. Eadric Streona, who had been backing Cnut, now turned traitor again and supported Aethelred. Sigeferth and Morcar were two advisors to Aethelred and chief thegns of the Danelaw and Five Boroughs area of England. They were most likely supporting Cnut. On the orders of Eadric, they were murdered at Oxford. Edmund, in a challenge to his father’s authority, immediately seized all the property of the two men and ordered Sigeferth’s widow Ealdgyth who was in captivity in Malmesbury to be brought to him, presumably as a hostage. But instead, Edmund carried her off and married her against his father’s will. 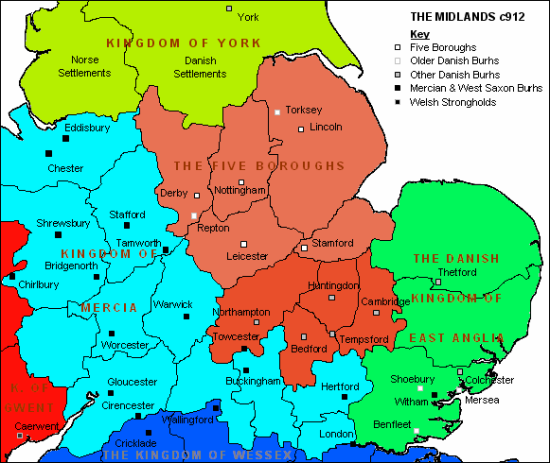 Map of the Midlands of England c. 912 showing the Five Boroughs and Danish areas (Image by Robin Boulby from Wikimedia Commons)

Ealdgyth may have been a substantial landowner in her own right. Edmund was able to raise an army among her supporters and those of the dead thegns. He was demonstrating the ability to attract loyalty from men with his vigor and military talent, all things his father lacked. He took control of the Five Boroughs area and offered himself as the people’s champion. The people accepted Edmund as their leader.

In the summer of 1015, Cnut returned with his army. Aethelred was very ill and Edmund’s eldest brother Aethelstan had died a few months earlier. The people looked to Edmund to fight the Danes. Both Edmund and Cnut wanted to secure the help and loyalty of Eadric Streona. Eadric decided to back Edmund but Edmund was wary of his loyalty and didn’t bring his forces to meet him. Eadric managed to gain the loyalty of the crews of forty ships and joined Cnut. Wessex was now isolated from Edmund and his sparse forces located in the northeast. Wessex accepted Cnut as their leader and paid tribute.

Cnut and Eadric went on a campaign raiding the heart of Mercia. Edmund tried to raise a national army during these months. But he was frustrated by the soldiers clamoring for Aethelred to lead the army and join with loyal forces in London. Aethelred was too ill and worried about treachery so he stayed in London on his sickbed. The soldiers melted away before there was any battle.

Next Edmund rallied the forces of Earl Uhtred of Northumbria and they went on a pillaging campaign in Shropshire and Staffordshire instead of fighting Cnut. Cnut marched into Northumbria and Uhtred went to meet him but he ended up submitting to him instead of engaging him in battle. Cnut then had Uhtred killed and took control of Northumbria. By now Cnut’s fleet at Southampton dominated the coast and he was ruler in the Danelaw and Northumbria.

Map of England including the area known as the Danelaw

Edmund’s next move was to retain the loyalty of London knowing his father was dying, which he did on April 23, 1016. The Anglo-Saxon Chronicle says all the councilors who were in London, as well as the citizens proclaimed Edmund king. However, there was a larger and more representative Witan which met in Southampton and proclaimed Cnut king. Edmund knew a battle with Cnut was inevitable but he needed the troops of Wessex. As he headed west to assemble an army, Cnut attacked London. The Danes sailed up the Thames. The Londoners thought London Bridge was secure and would block the ships but Cnut dug a ditch on the Southwark side and hauled his ships around the bridge.

During the summer, the fate of the nation lay in the defense of London which held out valiantly. All of Cnut’s attacks were repelled. Edmund came to London with troops from Wessex and the south and tried to counter-attack, first from the north bank of the Thames and then from the south bank. There were several inconclusive battles between Edmund’s soldiers and the Danes and their English allies at Penselwood, Somerset, and Sherston, Wiltshire.

Edmund raised more troops and forced the Danes to abandon their siege of London. They retreated to Greenwich. A few days later there was another battle at Brentwood which was a victory for Edmund but many English drowned in the Thames due to carelessness. Edmund returned to Wessex to raise more troops. The Danes attacked London once again but were beaten back. Another engagement in Kent drove the Danes back to their ships. It appeared that Edmund had the upper hand and it was at this moment Eadric of Mercia switched loyalties and surrendered to Edmund. The Anglo-Saxon Chronicle laments this was one of the worst decisions ever made for the English nation. But Edmund needed the men.

The Danes withdrew and Edmund followed them with the armies of Wessex, Mercia and the south, meeting in Essex at Assandun. Edmund’s intention was to fight Cnut in a decisive battle once and for all. Alas, Eadric left Edmund’s troops and joined Cnut’s. Edmund fought valiantly but it was a crushing defeat. Many bishops, earls and ealdorman and their sons were killed in the battle. It is hard to determine if the desertion of Eadric caused Edmund’s loss or if it was the superior manpower of Cnut.

Edmund Ironside fights King Canute at the Battle of Assandun on October 18, 1016 (Image in the public domain)

Edmund himself may have been wounded in the battle. It was his courageous fight and his reaction afterwards that earned him the nickname “Ironside”. Like his ancestor Alfred the Great, he fled to the west to raise another army. His behavior was just the opposite of his fathers. The fact that Edmund wasn’t giving up seems to have unnerved Cnut and his councilors. They weren’t looking for a protracted fight and would never have peace of mind as long as Edmund was at large to raise an army.

Messengers were sent to Edmund, hostages exchanged and with a vow of truce, Edmund and Cnut met at Alney in Gloucestershire. The kingdom that had been united under Edward the Elder and King Aethelstan in the tenth century was once again divided. Cnut received the larger territory including Northumbria, Mercia, the Danelaw, East Anglia and Essex. Edmund was recognized as King of Wessex and it became an area of unity for those Englishmen who didn’t want to live under Danish rule.

Edmund probably needed the break from the fighting. The succession at this point was perilously tenuous. Aethelred’s sons Alfred and Edward were young and overseas. Edmund’s brother Eadwig did not show promise. Edmund’s marriage with Ealdgyth had produced one son in 1015 and she was pregnant with a son who would be born in 1017. Edmund’s fight had given hope to the English but all this was dashed when he died unexpectedly on November 30, 1016. He was buried in Glastonbury Abbey beside his grandfather King Edgar the Peaceable. Edmund’s councilors recognized Cnut as king and all of England was now under Danish rule.

Now we have to address the various theories about how and why Edmund died. He may have died on Cnut’s orders by poison or stabbing. There were also rumors which persisted for one hundred years after his death that he had been killed on Eadric Streona’s orders. Twelfth century writers tell the wild tale that Edmund was in the privy and was stabbed from below in the intestines. It is most likely Edmund was wounded at Assandun and died later from exhaustion and his injuries. He was no more than twenty-eight or twenty-nine at the time of his death. Cnut may have had Edmund’s younger brother Eadwig murdered. Edmund’s widow fled with their sons Edmund and Edward to Russia and later to Hungary. Edmund was the last warrior king of the house of Wessex.