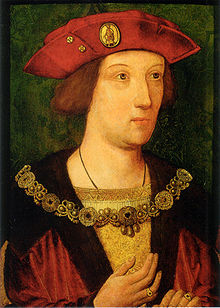 Henry Tudor’s Lancastrian claim to the throne of England was weak at best. In August of 1485, he defeated the Yorkist King Richard III at the Battle of Bosworth Field and established the Tudor dynasty as King Henry VII. To cement his claim he married the eldest daughter of King Edward IV, Elizabeth of York. They were to have four children who survived infancy.

Arthur Tudor was born shortly after midnight on September 20, 1486, just eight months after his parent’s marriage. King Henry was optimistic and insisted his son be born at Winchester, the legendary capital of King Arthur’s Camelot. Henry also required the child be named Arthur anticipating his reign and dynasty would bring back the golden age of the legendary king. Arthur’s christening took place at Winchester Cathedral. The baptism rites followed the etiquette observed for all of King Edward IV’s ten children. He was christened in front of the entire congregation, including the remaining members of the Yorkist nobility and their wives. His principal godmother was his maternal grandmother, Elizabeth Woodville.

When Arthur was three years old, he was made a Knight of the Garter and invested as Prince of Wales. In 1492, it was decided he would be sent to the castle of Ludlow where he had his own council and household. He was being prepared for the difficult duties of kingship. His tutors were John Rede and the blind Bernard André, who believed his student to be an excellent classical scholar. Arthur grew up to be studious and reserved. While at Ludlow, Arthur participated in the governing of Wales. 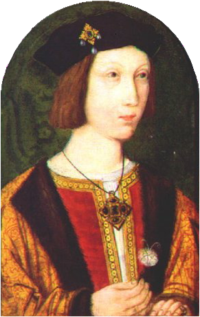 King Henry was doing everything in his power to bolster the legitimacy of his reign. When Arthur was two years old, he began negotiating a marriage with one of the daughters of King Ferdinand of Aragon and Queen Isabella of Castile. Eventually their youngest daughter Catherine was chosen. This alliance worked in favor of both parties. For Spain, the relationship kept England from allying with their mortal enemy, France. For King Henry, it gave strong recognition to the infant Tudor dynasty. There was an initial agreement of the betrothal in 1489.

Ferdinand and Isabella wanted to be sure King Henry’s position was secure before they sent their daughter to England. There was a formal betrothal ceremony at Woodstock in August of 1497. But it wasn’t until King Henry executed the Yorkist pretenders to the throne, including Perkin Warbeck in 1499 that they were satisfied it was safe for Catherine to leave Spain. A proxy marriage took place at Arthur’s manor at Bewdley on May 19, 1499. Arthur declared to the Spanish ambassador that he rejoiced in the marriage and professed his sincere love for Catherine, all according to the custom of the time.

There are two completed love letters Arthur wrote to Catherine and one draft, all of which were written in October and November of 1499. They are affectionate but more than likely they were dictated by his tutors. The letters were written in Latin and Catherine did respond. 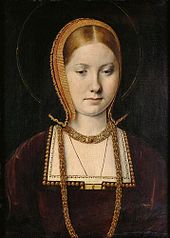 Catherine finally left Spain in the autumn of 1501. In early November, King Henry set out to meet Catherine at Dogmersfield, about ten miles from London Bridge. He was joined by Arthur who headed a column of magnificently dressed noblemen. When they arrived on November 4, they were intercepted by members of Catherine’s household who insisted it was Castilian custom the bride not speak with the King or meet her bridegroom before the wedding day. The King held a council in the field, on horseback and a decision was made. Because Catherine was betrothed to Arthur, she was an English subject and Castilian law and custom did not apply. Catherine’s servants did all they could to prevent the King from seeing her but eventually they had to give in. Catherine shocked her servants even further when she agreed to meet Arthur. They spoke in a mixture of Spanish and Latin with an English bishop acting as interpreter.

Arthur and his father returned to Richmond and then made their way to Baynard’s Castle which was well-located to St. Paul’s Cathedral. The city was bedecked in celebration of the wedding. On November 14, Arthur awaited his bride dressed in white satin at the altar of St. Paul’s. The nuptials were celebrated, the trumpets blared and the bells of the city rang. There was a wedding feast that lasted until early evening. Then the formal bedding ceremony commenced.

The Earl of Oxford led the way to the bedchamber where he tried out the bed himself first on both sides. The Prince entered the bed followed by Princess Catherine. The bishops blessed the bed and the couple and they were left alone. The gentlemen of Arthur’s suite were to recall later that Arthur arose from bed the next morning appearing triumphant, requesting a drink and swearing he had been in Spain for the night. This scene was to have thunderous consequences for Princess Catherine later in her life.

The wedding celebrations lasted for days. A tournament was held at Westminster. Arthur arrived in a mobile pavilion painted in stripes of the Tudor colors of green and white. It was a spectacular pageant. Then the court dances began and Arthur danced with his mother’s sister Cecily. Another banquet was held in the Parliament Chamber and there was an even greater spectacle of pageantry. Eventually the celebrations came to an end and the court returned to Windsor.

It was decided the Prince and Princess were to return to Wales. Catherine had to say farewell to many of her retinue. On December 21, 1501, Arthur and Catherine set out for Arthur’s manor house at Bewdley in Worcestershire which had been turned into a small palace. The couple stayed there a short time and then traveled to Ludlow. Arthur returned to his work with his council which was headed by its new Lord President, Dr. William Smyth, Bishop of Lincoln. Arthur was also attended by his Chamberlain Sir Richard Pole. Late in March, both Arthur and Catherine were laid low by a virus and were very ill. 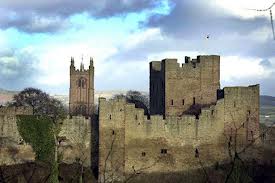 On April 4, 1502, a messenger arrived at Greenwich Palace near London. He informed the privy councilors of the reason for his visit. The council decided to call in King Henry’s confessor to speak with the King. The friar knocked on the door of the King’s chamber, was admitted and asked all to leave the room. He informed the King that Arthur had died on April 2, the cause being the sweating sickness.

The King was shocked and immediately sent for Queen Elizabeth. She saw her husband’s grief and did her best to comfort him. She reminded him that he was the only child of his mother and they had their son Henry and their daughters Margaret and Mary. She also reminded him they were still young and could have more children. She felt they needed to accept their misfortune. Henry thanked her for her words and Elizabeth returned to her apartments. Once Elizabeth was with her women, she broke down, weeping in the deepest grief. Her ladies called for the King to comfort her. He arrived and did his best to soothe her reminding her of her own brave words to him before.

Arthur’s body was embalmed at Ludlow and put in a wooden coffin and lay in state until April 23. The town was too small to accommodate a large funeral. The coffin was taken in a procession from the castle to the parish church where three masses were heard. The funeral ceremonies lasted for days. The body was then taken to Bewdley and then finally rested at Worcester Cathedral. More ceremonies were held. Heralds delivered Arthur’s helmet, shield, sword and embroidered coat of arms, all according to chivalric custom. When all these ceremonies were completed and mass was over, the coffin was taken to the south end of the high altar where a grave had been prepared. The Bishop of Lincoln, weeping, threw earth into the grave and sprinkled it with holy water. The Comptroller of the Prince’s household and others broke their staffs and threw them into the grave. Arthur’s parents did not attend the funeral and Catherine was still too ill to attend.

There has been speculation on what exactly caused Arthur’s death. Sweating sickness was used to describe anything causing a high fever from pneumonia to tuberculosis. One of the symptoms of tuberculosis is night sweats. Other diseases mentioned have been diabetes, cancer and consumption, the euphemism for tuberculosis at the time. The best description of his death hints he died of some malignant disease.

The cause of death could have had an influence on Arthur’s ability to have children. There is a possibility of testicular tuberculosis which then spread to his lungs. Another explanation could be a testicular tumor that spread to the lungs.  Another theory put forward is he had cystic fibrosis which caused uncontrollable coughing and sexual dysfunction. Arthur may have suffered from one of these conditions before he finally succumbed to actual pneumonia, influenza or sweating sickness. Catherine was also very sick but she managed to survive. She would remain at court in complete penury until King Henry VII died in 1509. She then married Arthur’s brother, the new king, Henry VIII.

Further reading: “Arthur Tudor, Prince of Wales” by Steven Gunn, “The Sisters of Henry VIII” by Maria Perry, “The Six Wives of Henry VIII” by Alison Weir, “The Tudors: The Complete Story of England’s Most Notorious Dynasty” by G.J. Meyer