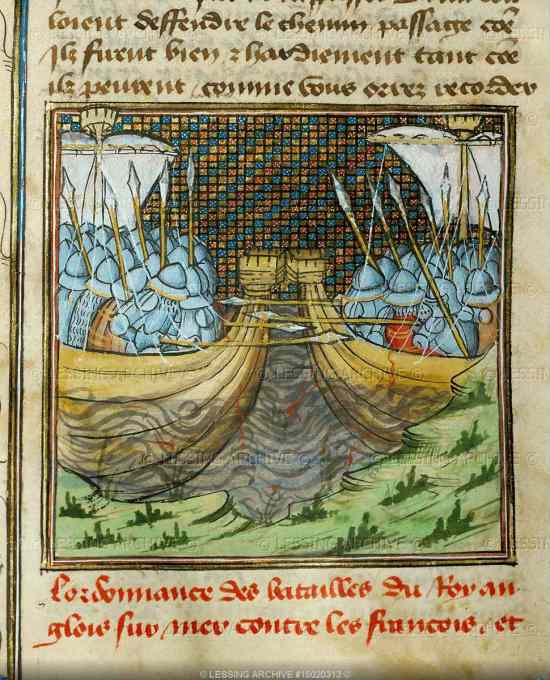 By the time of reign of King Edward III of England, some of the Angevin Empire had been lost. Edward still retained the Duchy of Aquitaine, the legacy of Eleanor of Aquitaine, wife of King Henry II. Edward held the duchy as a vassal of the French King Philip VI. When he did not fulfill his duties as vassal, Philip seized the valuable asset, rightly angering Edward. In 1340, Edward declared himself King of France, citing his mother Isabella of France’s birthright as the daughter of King Philip IV. Thus began the Hundred Years War which lasted from 1337-1453 between the Kingdom of England and the Kingdom of France and their various allies.

In the beginning, Edward and his eldest son, Edward the Black Prince were successful in battle at Crécy in 1346 and Calais in 1347. Along with these battles, Castilian ships from Spain were fighting against England as allies or mercenaries of France. This included piracy between trading ships. In 1350, a Castilian merchant fleet, under the command of Don Carlos de la Cerda was loading cargo in Flanders to be carried to the Basque coast. De la Cerda was a soldier of fortune with connections to the Castilian royal family. On one of the fleet’s journeys to Flanders, accompanied by warships and armed, they captured several English ships and threw the crews overboard. These piratical incidences were very common back then. By early August, Edward received news that forty Castilian ships had gathered at Sluys and there were plans to attack England.

On August 10th, Edward was at the port of Rotherhithe in London when he announced his plan to attack the Castilian fleet. The English fleet of fifty ships gathered at Winchelsea and Edward traveled there accompanied by his queen, Philippa of Hainault and her ladies and his sons, the Black Prince and John of Gaunt as well as many nobles. The women were situated in a convent for safety and the King embarked on his flagship, the “Cog Thomas” on August 28th. The English fleet patrolled the seas but saw nothing. On Sunday, the 29th, the weather was warm and misty. The King was dressed in a black velvet jacket and a black beaver hat, making a handsome appearance. He sat upon the deck of his ship and ordered his minstrels to play a German dance which had been brought to England by his dependable knight Sir John Chandos. The King kept a watchful eye on the castle mast, waiting for a signal from the look-out. None came. Sir John Chandos himself began to sing. The King seemed to be enjoying himself immensely.

Then the awaited signal came from the mast. The look-out saw a Spanish ship. Then he saw another. Then another. In the end there were too many to count. De la Cerda could have avoided the English but he relied on the size and strength of this fleet. Looking forward to combat, he had recruited mostly Flemish crossbowmen and being confident, he bore down on the English ships sitting at anchor. The King and his men drank each other’s health, the trumpet blared and the battle began. The English used elementary tactics, each ship running straight at a Spanish one. They would grapple the ship and hang on with tenacity, fight until they could get on board and fling any living Spaniard into the sea. The Spaniards answered by dropping huge bars of wood and heavy lumps of metal onto the English ships in hopes of sinking them.

King Edward’s ship was rammed by one of the enemy ships causing the “Cog Thomas” to begin sinking. But Edward and his men managed to scramble onto the Spanish ship they were hooked to and watched as their ship sank. The Black Prince’s ship also was sinking and he would have gone down with it but the Earl of Lancaster sailed up next to the Prince’s ship and rescued him. The English ship “La Salle du Roi”, under the command of Sir Robert de Namur was being carried off by the Spanish ship she was hooked to when a sailor name Hannekin leapt on the foe’s ship and cut the halyards of her mainsail. It fell down heavily, entangling and injuring many of the Spanish sailors, thus saving the English ship. The fighting continued until twilight.

By nightfall, the English had won a glorious victory. Edward and his fleet anchored at Winchelsea and Rye. The King and his sons conscripted horses from the town and road the two English leagues to the convent where Philippa and her ladies were awaiting news of the battle. They all spent the night in revelry, recounting tales of arms and armor and the bravery of the day.

This battle was called the Battle of Winchelsea or the Battle of Lespagnols sur Mer. The Spanish lost between fourteen and twenty six ships. The English lost at least two ships. The main source for account of the battle was from “Froissart’s Chronicles” by Jean Froissart, the Frenchman who worked for both Edward and Philippa. He interviewed men who fought at the scene. With the magical good fortune of the English, the Spanish were defeated and troubled the coast of England no more for many years.